17 January 2022, Kolkata: One of the oldest cathedrals of Kolkata, The Cathedral of the Most Holy Rosary, Burrabazar, founded on 1799 will install reliefs of St. Francis of Assisi which was put up as an exhibition during Xmas eve and inaugurated by Chief Minister of West Bengal Mamata Banerjee in the presence of Archbishop of Kolkata, Thomas D’Souza, Pro-Vicar of The Cathedral of the Most Holy Rosary, the Police Commissioner, Mr Soumen Mitra, Industrialist, Promode Kumar Agarwal, Dr Ralf Heckner, Swiss Ambassador in India, Mr Umesh Chowdhary, Swiss Honorary Consul in Kolkata, Mr Subrata Ganguly of creative design firm Church Art and other dignitaries.

The pictorial displays have been conceptualised and created by Kolkata-based creative design firm Church Art and depicts the life of St. Francis of Assisi – the Patron Saint of Environment and the originator of the tradition of cribs. The reliefs would be installed in the Cathedral premises to inspire and motivate people to love and protect Mother Earth.

“This year we observed a Green Christmas in Kolkata to spread environmental awareness and practice in daily life the conservation of nature and its resources,” said Fr Franklin Menezes, Pro-Vicar of The Cathedral of the Most Holy Rosary, Burrabazar, Kolkata.

A crib set, often described as a `nativity scene’, was also on display at the Cathedral. A crib, is a depiction of the birth of Jesus as described in the gospels of Matthew and Luke. The origin of the Christmas Crib or Manger or Nativity scene is often first ascribed to Saint Francis of Assisi, who, in 1223 AD, celebrated the `Feast of the Nativity’ in a new way that led to a new devotional practice popular even today.

Nativity scenes exhibit figures representing the infant Jesus, his mother Mary, and Joseph. Other characters from the nativity story such as shepherds, the Magi, and angels may be displayed near the manger. Distinctive nativity scenes and traditions have been created around the world and are displayed during the Christmas season in churches, homes, shopping malls, and other venues, and occasionally on public places and in public buildings.

The Vatican has displayed a scene in St. Peter’s Square near its Christmas tree since 1982 and the Pope has for many years blessed the mangers of children assembled in St. Peter’s Square for a special ceremony. In July 2015, the first ever crib set depicting Jesus’ birth from India, designed by Kolkata-based creative firm Church Art, was added to the International Nativity Museum of Bethlehem’s collection of 223 nativity representations from over 93 countries. Church Art has installed various art work across India and abroad based on Church and Biblical themes in line with the canon law.

The International Nativity Museum in Bethlehem, a UNESCO Heritage Site, is currently located close to the Church of Bethlehem which is considered to be the spot where Jesus was born. Local lore passed down from ancient times holds that the three travellers or Magi who were guided by a star had passed through this path where the International Nativity Museum now stands.

History tells us that St. Francis of Assisi was inspired by his visit to the Holy Land in 1219 where he had been shown Jesus’ traditional birthplace. It was in 1223 that the first crèche was celebrated in the woods of Greccio near Assisi, on Christmas Eve. St. Francis’ idea of bringing Bethlehem into one’s own town spread quickly all over the Christian world, and soon after the death of Francis in 1226 there were Christmas cribs in churches and homes. The home crib became popular in Catholic Europe after 1600, owing, it is said, to the efforts of the Capuchins. 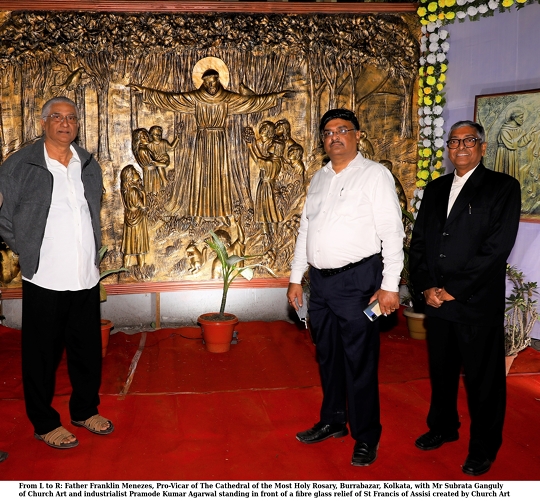